I seem to be having a baseball-themed week, so I figured I'd stick with that for the Thursday thirteen. I asked my twitter and facebook friends to name their favorite baseball games - ever. In no particular order: 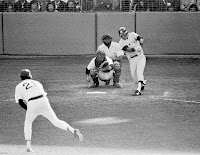 September 21, 2001 - Atlanta Braves at New York Mets - This was the first game played after the September 11, 2001 attacks. It was played in New York, and the Mets won, thanks to a two-run home run by Mike Piazza (SN: my favorite Met ever). Baseball helped bring a city, and a nation, back to life.

Everyone had a different reason for remembering the game they mentioned. Some appreciate the intensity and finality of a one-game playoff, others recalled a fond memory, some simply loved the game because they saw it live. Others remember their team winning - whether it was a trophy, or just bragging rights. Some because it was funny, or silly, or just plain stupid.

We may be fans for different reasons, but baseball fans know what true love and memories are.

Special thanks to Angelos, Sassy, Meagan, Lee, Kelly and Patrick for helping me out.
Posted by Sue Rock at 9:46 AM