I was named in one of those challenges where I'm supposed to post photos of my boyfriend and me to celebrate being in a relationship. The challenges originally were celebrating marriage. I figured not being challenged was a perk of not being married, but I guess not.

About a week ago, I shared a post by a blogger who said she "could not in good conscience participate in the challenge." She makes an excellent point:

The other day, a friend of mine summarized something she’d heard somewhere, and I love it. I LOVE IT SO HARD. "You know one hundred percent of your own life," she said. "But on social media, you only share the best five percent of it: your baby’s first steps, your trip to the Bahamas, your graduation day. That’s all anyone else sees. It’s fascinating to keep up with those things, for sure. But it’s also why Facebook can be so discouraging: we compare one hundred percent of our own life to THE BEST five percent of everyone else’s."

My relationship is nothing short of amazing. I have never been so happy, and I thank God every single day for bringing Kurt into my life. Every. Single. Day.

Our best is more than 5% - I'd say it's probably more like 90 - 95%. My boyfriend and I genuinely enjoy each other's company. We laugh a lot. We don't have to deal with a lot of the "stuff" other couples face. We are blessed with the freedom, time, and resources to have a lot of fun together. Those of you connected with me on Facebook already see those pictures - sporting events, museums, hikes, road-trips. I share and celebrate our adventures all the time.

But there is a 5 - 10% that you don't see. My anxiety creeping in and making his life difficult. Deciding what to eat for dinner. Giving my cat a bath. Me getting eaten alive by mosquitoes on a hike, or icing my knee after. Folding laundry. Grocery shopping.

I feel like if I was going to share more of our relationship, I should include those moments too. But I can't - even if I wanted to remember those times, I think we all know there's no way I'm taking a photo when I'm sweaty or without makeup.

It's silly to think those things deserve to be celebrated. Really - who wants to celebrate icing her knee? But I feel like a relationship isn't just made up of all the fun stuff. It's made up of how you handle the bad stuff, too. I'm lucky enough to have someone who will get the ice for me - and also bring me ice cream so I can rest. Now that's worth celebrating.

So my Facebook friends and family will continue to see the absolute best 90 - 95% of my relationship - and I will continue to celebrate all 100% every day.
Posted by Sue Rock at 1:17 PM No comments:

I have written about my anxiety and depression before because I see no reason to ignore the reality. I've never really gotten too personal, though, and I only recently realized that was because I am a little ashamed. Inspired by this post I found, I've decided to change that and talk a bit about what happens. That's also a reality, and lately, it's been one that I really can't ignore.


My anxiety attacks usually last about a day, though more recently, I've had attacks that have lasted several days, and one lasted almost a week a few months ago. I will tell anyone who asks that is what's wrong with me that day - I'm having an anxiety attack. I always get the impression they think this is a work of fiction on my part, or they think it's just a case of the worries, and if I just focus elsewhere, I'll be fine. Or they tell me to calm down. Or they just don't want to hear.

When I say I'm having an anxiety attack, I don't mean that I'm just a little worried. I mean - I am worried - but by the time I've gotten to the anxiety attack, I'm well-past the point of worry.

My head hurts. Most of the time I am dizzy and feel like I may pass out at any moment. It's hard to walk, and it's hard to drive. That can make getting to work difficult, but I usually manage. Of course, it doesn't always matter, because I can't focus on anything. It's also usually hard to see. 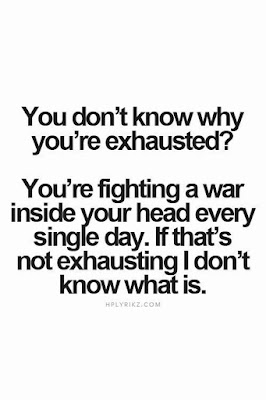 My stomach also hurts. You've felt butterflies before, right? This is like that, except it's like the butterflies are being attacked like a swarm of wasps. I can't eat - which would be great for my jean size, but it never lasts. Anyway, not eating doesn't really help with the seeing, walking, and focus.

There's also the hot flashes. This is great. I could be standing outside in 40 degree weather with short sleeves and I'd be sweating. Very uncomfortable, and just adds to the fun.

Some people want to know why I get so worried. Not easy to explain. It's not like my problems or worries are worse than anyone else's. In fact, my life is probably easier than most. The difference is my brain and body physically respond to my worries. I can manage that (medication, vitamins, exercise, diet) but there is no escape.

So just don't worry, right? I wish it were that simple. Here's what happens:

Someone says or does something that should mean nothing. Maybe they ask a question. Or mention something might happen. It usually involves change, and with me, it almost always involves a relationship (because those are my biggest priority). It seems insignificant to the other person - and I'm the first to admit it probably is insignificant - but almost immediately, my brain starts worrying.

What does this mean? What might happen? What could this cause?

A million questions swirl in my head. Pretty soon, answers are coming at me from every direction - and every single one is negative. It's like if you were in a room listening to 100 people hurl insults in your direction. I try to replace those negative thoughts with positive, and sometimes I'm successful. But that is a lot of work, and I'm not always successful.

I have learned a lot of "coping mechanisms." They work - most of the time. Sometimes the anxiety is so overwhelming that it takes over even my best efforts and tools.

So what do I do in the meantime?

I remind myself how lucky I am. Everyday, I tell myself that it will be OK. I remind myself that my God is bigger than any of my problems. I pray. I hope. I talk to my friends. I let myself cry and then I move on because letting anxiety win is just not acceptable.

I have far too much to live for.