I don't know much

I don't know much about much, but one thing I have learned in the last few years is that mistakes and challenges are often lessons in disguise.  People are doomed to repeat the same mistake until they finally learn the lesson it was meant to teach.

September 11 is a pretty awful day. No one has good memories anymore. Everyone talks about where they were when the towers fell. It's a sad reminder of a tragic day filled with nothing but grief and loss.

I wasn't personally affected. I wasn't in New York or Washington DC or in a field in PA. I wasn't on a plane. I didn't personally know anyone who was. But I felt the day. It triggered some terrible anxiety and worry for me - that something would happen and take someone away from me. Loss is my greatest fear, and it doesn't take much for me to feel scared.

In the days and weeks that followed, everyone everywhere saw a change in Americans. We were kinder towards each other - more accepting, understanding, and accomodating. Differences didn't really matter - if you were an American, you'd been attacked. We were all neighbors. We weren't the arrogant Americans they thought, and they couldn't weaken our spirit. The US was stronger because of the attack.

In the years since, there's been a huge shift. We're tougher on each other. We're divided over issues like same-sex marriage, guns, welfare, Healthcare, religion - you name it, we've probably used it as a reason to argue. We attack each other over political view points and personal opinions. We poke fun at one another for meaningless reasons.

Of course we are all entitled to an opinion, whether we agree or not. Embracing that right means we still have not conceded victory to the terrorists. We continue to embrace the very freedom they sought to attack. We are still strong in our belief that freedom includes the right to disagree.

I think every time we argue with each other, we weaken that freedom. Taking a side is fine; judging others for the side they choose is not. The minute we allow our opinions to become bigger than our humanity - the terrorists win, just a little.

Like I said, I don't know much. But from where I sit, we need to get back to respecting each other, working together, and making our whole country a better place.

We can post all the pictures and poems and memories we want one day a year. But if we really want to win, we need to bring a whole lot more light into our world every day.

Until we learn that lesson, they will have won. 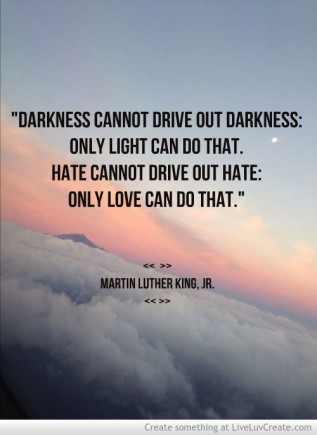