I watched the movie Inception the other night. It still isn't my favorite, but since it only took me three viewings (over several years) to sort of get it, I'd probably watch it again.

At the end, my boyfriend asked, "So how many buttons are in your elevator?" I stared at him for a beat and he continued, "The buttons were regrets in life."

I used to have a lot of regrets. I've regretted my contributions to my failed marriage. I've regretted dating men who ultimately hurt me (and some who just never seem to go away). I've regretted career choices, financial choices, and not sticking to a healthier lifestyle.

In the movie, the characters can use the elevator to visit moments they regret. This is presumably to try and relive, and possibly change, those moments (Though that makes little sense, because the elevator only appears in dreams. OK, it's possible I don't really understand this movie at all.)

I came to the conclusion a few years ago that regrets were pointless. I can't go back to those moments and change anything. Honestly, if I could, I'm not even sure I would. There's no way to tell what else I would impact by making even the tiniest change. Why take that risk?

The truth is, life is nothing but a series of decisions strung together. Some good, some wonderful, and some regrettable. But even the worst choices can lead to a positive result.

Maybe I'm naive, or maybe I'm just fooling myself. But it seems to me that every choice - good or bad - is a chance to learn. What works, and what doesn't; who you are, and who you want to become. You learn what makes you happy, and where you want to be. Why would you regret all those lessons?

I have noticed that some of the worst things to happen in my life were preparing me for something so much better. At the time, of course, I couldn't know - and the pain or sadness felt like I'd made a huge mistake.

But knowing what I know now... Why would I regret anything that helped get me where I want to be?

Growing in my faith has taught me that there is a plan much larger than my own - and my regrettable moments are as much a part of that plan as everything else.

When you look at them that way, those moments aren't so bad, after all. 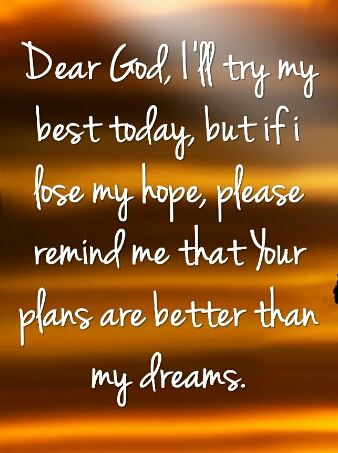