I still don't want to share my political views. I'm scared of being yelled at, being called stupid, or having people hate me. But I have a few, slightly generic thoughts in my head - not enough to really form an actual political post, but just enough to frame out what I think might be the most important take-aways from this election season thus far.

- I understand that people don't really like Hillary, or trust her. But I'm still confused on why some refer to her as a criminal.

- I totally understand disagreeing with a party's views, and even voting for the opposing party just because... but the idea of voting for someone you admit is bad for the country doesn't make sense.

- There is very little about government that is fair or logical or reasonable. Much of it is corrupt and biased. I'm confused by the idea that voting for one guy could change hundreds of years of that history.

- If  you want to change the system, maybe not voting for a rich white dude is a good place to start. 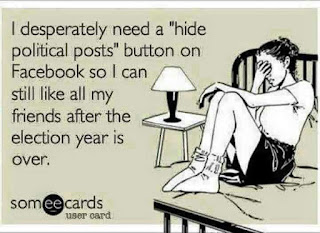 - What exactly is the appeal of Donald Trump? People say it's because he "speaks the truth." But whose truth? He's seems like a racist, misogynistic bully to me, and while I am sure he's a very smart business man, I've seen no evidence that he knows how to work with others to get something done. I've met a lot of CEOs and presidents in my lifetime; they were all smart, determined, resilient, and used to getting their own way. None of them possessed an ounce of the diplomacy required to be the leader of the free world.

- That being said... if you are a woman, and you've ever lost a new job or a promotion or a raise because you are a woman, you should be at least a tiny bit happy that another barrier is broken. It's a big deal for a woman to stand where Hillary stood the other night. Take a moment and think on that, even if you still don't like her or her politics.

- If we're friends, I will still be your friend after this election. Unless you're a racist, misogynistic bully and/or support the idea that minorities, women, or immigrants are in any way less important than white, American men.

But if that's the case, I'm not sure how we became friends in the first place - and I'm sure you won't think of it as any big loss anyway.


I am reasonably sure those of us who just want a safe, happy, peaceful world outnumber all of those people. (I wish I was 100% on this one, but I'm just not.) I just don't think we all agree on how to get started.


Here's a picture of my cat, being all happy and peaceful. Coincidentally, he also looks tired in this photo. I figure we need to find a way to get on the same page. Everyone likes Joe, so maybe this is a good place to start? 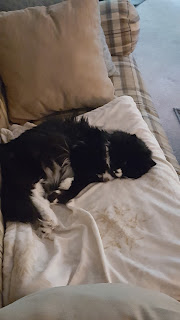