Fat is not the problem

Plus-size, fat, voluptuous... whatever you call us, curvy girls are getting a lot of publicity lately. From magazine covers, to articles, to a seemingly-harmless post on a friend's Facebook, everyone is talking about fat chicks. Not only the women, but what is OK - and not OK - to say about them.

I've spent a lot of time carefully curating the people with whom I surround myself (both online and in real life) so I don't see a lot of negativity (unless I go searching, and I only do that when I'm in a really good mood so I can handle what I find). What I do see (and hear) are a lot of well-intentioned comments that fall just short of their mark.

There are the obvious insults. Any time a heavy woman posts a photo of herself, the trolls come out in droves. You know, these guys who hide behind the keyboard in their parents' basement, but feel they are in a position to judge another person.

But to me, those aren't even the worst comments. Sure, being called names is hurtful - but most of us have been called names all our lives. Personally, if I hadn't learned how to handle that kind of insult, I wouldn't have survived past grade school.

It's the well-intentioned, but slightly-off-mark, comments that are tough.

Comments like, "She's fat - but she's still really pretty," or "She's so brave for wearing that (whatever item) with such confidence." Then there's my personal favorite, "That outfit is so flattering."

Obviously these all sound like compliments. They're meant in a genuine way, and people honestly mean to convey a good, positive message. They never intended to fat-shame - but do they? 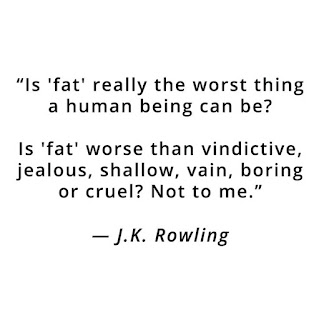 Use whatever fancy, pretty word you like; the truth is, I'm fat. I'm also brunette, short, 42, white, hazel-eyed, and have a medium complexion. All of those things make up how I look - and all of them could be appealing, or not, to anyone who I encounter. So why is my weight the only thing that makes me "brave?" Or makes people question my confidence? Why is it the one thing that everyone feels the need to excuse?

That's the real problem. We are all conditioned to think that "fat" is an insult, rather than just another adjective used to describe someone. We, as a culture, have come to believe that fat is some sort of obstacle that people (particularly women) have to overcome. We look at a person who is overweight and assume they are unhappy, unhealthy, and struggling - in life, in relationships, in everything.

We believe this so whole-heartedly, without even realizing it, that we actually get offended when one person calls another person fat. Someone calls me fat, my friends jump to my defense. But if that same person called me short, it would be OK. Why?


My friends believe that "fat" is a problem, and "short" isn't. My friends believe that with just that one word, someone has labeled me as the worst thing anyone can be. That's why they feel the need to defend and excuse my "fatness" (that's auto-corrected twice now, so apparently, it's an actual word). How dare someone say such a horrible thing about their friend?


But defending and excusing and explaining only reinforces the idea that "fat" is a problem.

That's the problem. Not the word fat - but what we've all been taught, and continue to teach, is its true meaning.