Recently I've been in a couple of conflicts, with two unrelated people. In both cases, I came into the situation with a completely different perspective and recollection of what had happened to get us to the point of conflict.

Both were convinced I was in the wrong.  My views were "skewed." I was laying blame. I was being selfish, doing things only to make myself look good to others.

I disagreed with both. While I absolutely know I can be selfish, I truly didn't think I was in either case. While I do an awful lot to make myself look better, this comment had more to do with actions than a Sephora purchase. As for my views... I could have listed example after example in support.

My first inclination was to do just that. I wanted to rise to the argument, and defend my feelings, perspective, and actions. But I didn't.

Sue from a few years ago may have. She may have found herself in an all-out shouting match, making sure everyone understood exactly why she was right.

Present-day Sue just can't. I let that instinct settle, and then pass. Not just because I wanted to avoid the conflict, and not at all because I didn't want to stand up for myself. Definitely not because I thought I was wrong - it all came down to feelings, and I'm as entitled to mine as anyone.

I didn't argue because I honestly didn't see the point. Both people came at me prepared to fight. They were never going to back down. The louder I protested, the louder they would have argued. All that accomplishes is a bunch of yelling and no listening - which has never, ever solved a problem.

I guess I've come to realize that if someone doesn't care how you feel, simply speaking your mind more loudly isn't going to change theirs. It's not unlike raising your voice when speaking with someone who doesn't understand your language. You can repeat yourself as loudly and as often as you want - to them, you simply don't make sense.

So I never argued. I never defended myself. I let both people walk away thinking I'm selfish and awful and that I don't care. Which, is what they already thought anyway.

I'm not sure if that's me being selfish, lazy, or mature. You can decide for yourself - I won't argue. 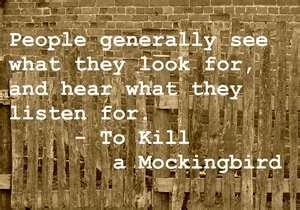