I honestly didn't know who Tim Cook was until this morning, when every news outlet I follow anywhere "broke the news" that he announced he is gay.

I'd much prefer to live in a world where men and women announcing their sexual orientation would not be news. But - apparently, a lot of people care.

Search "Tim Cook Android" on twitter, and you'll find tons of people who are either happy they already use Android devices, or who plan to switch because Apple's CEO came out.

Disturbing? You betcha. But now that those folks have come out (as being stupid), here's a thought....

CEOs from all tech giants should come out. As something, I don't care what. Gay, bi, lesbian, trans gender. Whatever you got.

All the ignorant biggots would have to cancel their plans and throw out their devices.

Then the rest of us can continue browing Buzzfeed lists and cat videos in peace. 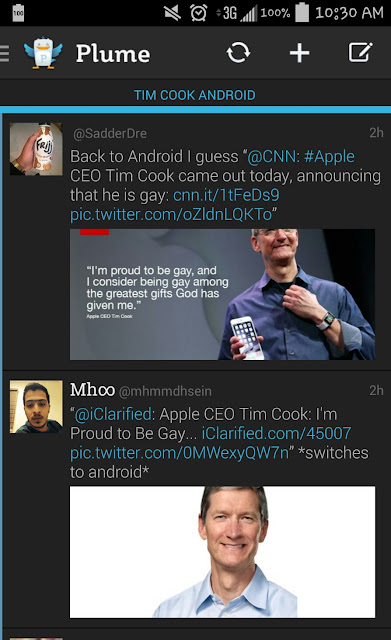