I am a big believer that the phrase "for her size" or any of its equivalents should not be used when paying someone a compliment. Phrases like "that dress flattered her figure" should also be booted from the fashion vocabulary.

Every woman, no matter her shape or size, has features she wants to show off - and those she'd like to hide as much as possible. The right dress can do that for any woman. Regardless of size, one bad fashion decision can make even the most beautiful woman look regrettable.

When you're talking about red carpet fashion - and particularly the Oscar red carpet - fashion isn't just about the dress. It's about how the whole look is pulled together. That means hair, makeup, jewelry, accessories, the dress, the shoes, the smile, the posture - the whole picture.

When a thin actress wears a particularly bad dress, we don't say it's not flattering to her figure. We don't say she couldn't pull it off because of her hips, or whatever. We say - holy $&%#, what was she thinking?!

I think curvy women should be treated the same. Beautiful is beautiful - and awful is awful. Size and shape don't need to be mentioned. It's implied - if the look was awful, then obviously the dress did nothing for the woman.

Take Adele. She's beautiful, immeasurably talented, well-spoken, funny, gracious - all the things that make you root for a celebrity.

When I say she's beautiful, I don't mean "for her size" or when she wears a "flattering outfit." I mean she's a freaking beautiful woman - one who has made some regretable fashion choices. 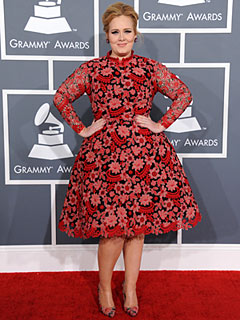 Her dress from the Grammy Awards - actually, her whole look - is awful. Not because of her size. Not because of her age. It's ugly because it's ugly. She's worthy of better. Period. It's not about her size - it's about no one can make this dress look OK, especially on a red carpet.

What it looks like is someone thought her hips needed to be hidden, and her legs elongated to draw attention away from her size. So someone thought Adele's size was something that needed to be hidden, and they thought covering her in a field of flowers was the way to go. I can't explain why the hair is all the way up...but it also goes to show that whoever styled the look doesn't appreciate true beauty.


I'm hoping whoever this person is was fired.

After last night's Oscar broadcast, it seems like someone was fired - or at least schooled a little.

Adele wore this look on the red carpet... 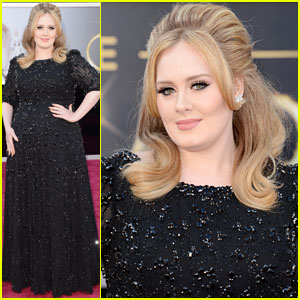 ...and this look when she performed her now Oscar-winning song "Skyfall."

Her performance look? Hot - at any size.

Black is a traditional red carpet look. I think that's fine (and Adele does it all the time) because there's never anything wrong with being classic. I like that she added some sparkle to the red carpet look, but I still don't understand hiding the hips and arms. Her body is beautiful, and her skin is gorgeous - show it off!

A "curvy" acress who seems to have it all figured out (pun intended)? Octavia Spencer. She isn't afraid of color, sparkle, or fit.


﻿ ﻿
I have read that Ms. Spencer always works with the same designer. She has said Tadashi Shoji doesn't just hand curvy celebrities a "designer tent" and send them on their way, but rather works with women to come up with her look, regardless of size.

I wonder if there's any way Shoji could have helped some of the acresses of a smaller size last night? 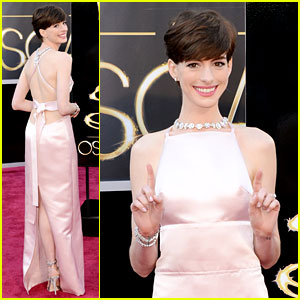